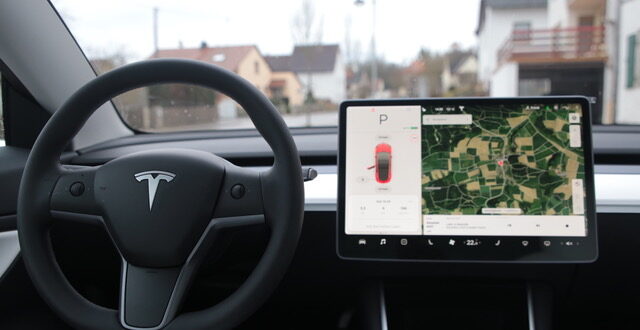 Whether Model S, Model 3, Model X or Model Y – Tesla brand cars are becoming increasingly common on Germany’s roads. The vehicles impress with their design, innovation and, of course, their sustainability.

But buying a vehicle from Tesla has a high price. That’s why there are various options for financing a Tesla – you can find out which one is best for you here

The story behind Tesla Motors

The company’s mission is to create a more sustainable future and level the transition to renewable energy.

The company, which has been around since 2003, is the pioneer when it comes to electric vehicles. They made it their goal to produce e-cars for the masses.

And with the Tesla Roadster, Tesla was then the first company to launch a pure electric car in 2008. But the Tesla Roadster was only the first step for the company, it was followed by the Model S. A luxurious premium sedan, it was the electric car that sold the most in 2015-2016. The range was then complemented by the Tesla Model X, a luxury station wagon in 2015 and in 2016 by the Tesla Model 3 – the all-electric sedan. As of 2019, the range was expanded by Tesla’s e-SUV, the Model Y.

The most affordable Tesla – The Model 3

Since Tesla has launched the Model 3 as the most affordable model, it is also the best-selling model of the brand.

But not just of the brand – the Model 3 is the best-selling electric car worldwide in 2021.

The power of the dual engine in the Long Range and Performance models ensures top speeds of up to 261 km/h and up to 513 hp.

But it’s not just the electric motor that’s unique – Tesla is known for its minimalist vehicle equipment. Everything can be controlled via a touchpad and the phone acts as a key in the Tesla. In addition, the innovative Autopilot offers further comfort for the driver, because the latest technology allows the car to monitor everything for its driver.

How much does a Tesla cost?

However, the models are also still available in the more expensive Performance version or Plaid version.
Since the prices for a Tesla are not cheap, there are ways to finance a Tesla and you should take advantage of them.

In Germany, there is the possibility to receive a subsidy when purchasing e-cars. This is calculated as follows.
The subsidy amount is made up of a part paid by the state (2/3) and the part paid by the manufacturer (1/3).
Up to 40.000€ manufacturer price one receives a subsidy of 9.000€. Everything over 40.000€ is subsidized with 7.500€.
The environmental bonus is then 9,000€ for the Tesla Model 3 in the standard version. All other models are supported with 7,500€.
It should be noted that the purchase price must not exceed 65,000€. The application for the environmental bonus must then be submitted online.

For Tesla financing the options of bank transfer, financing through a bank or leasing.
There are three offers of financing at Tesla: leasing, the balloon loan and the installment loan.
Mileage leasing, as the name implies, is limited to a set mileage. A monthly lease payment is set, which in most cases are lower than financing. The disadvantage with Tesla leasing is that the vehicle does not become the property of the lessee, but is returned at the end of the lease.
The balloon loan has a set final payment and in the months leading up to the final payment you have low monthly payments that you pay. After the balloon payment at the end, the car becomes the property of the buyer.
The installment loan, unlike the balloon loan, has set monthly installments to pay off the car. Here, too, one becomes the owner of the car at the end of the loan term.

Tesla financing with a car loan.

Since Tesla electric vehicles are experiencing a major boom right now, there is also an increased demand for the financing options for a Tesla. And in most cases, the option of a loan with installment payments is more favorable than financing through the manufacturer. This is because the amount to be paid can be settled immediately with the dealer, which usually results in a price reduction. The vehicle price is then paid off in installments to the bank.
If you decide to take out a loan with an credit institution, you should make sure that you choose a car loan. The car loan has the advantage that the bank takes the vehicle as collateral in case of default. In addition, the advantage of car financing through a bank is that the term, as well as the monthly payment terms, can be adjusted entirely to your own finances.
Car loans can be easily viewed and compared online through different providers to really get one of the best deals.

There are also countless offers for a Tesla as a used car. Tesla itself offers used vehicles on its website that can be purchased at a lower price.
For example, Tesla offers the Model S from 2016 with a mileage of about 80,000 km for 49,000€. So the current Model S costs almost double the price of the used car.
And you can also buy the more recent Tesla Model 3 used at Tesla. The Model 3 from 2019 costs around 44,000€ in the Long Range version. Here the savings, despite the mileage of just under 35,000 km is therefore significantly lower.
The advantage is that you still get the manufacturer’s warranty for some Tesla models. However, this requires that the vehicle is not older than four years and has driven less than 80,000 km.
Those who want to buy their Tesla used, but not directly from Tesla, can be really lucky on the usual portals and get a good price. With the older models from second hand, you are sometimes lucky as a buyer and can even still charge completely free of charge at the Tesla Supercharger charging stations. This is only possible if the vehicle is not resold through the manufacturer.

What do you have to look out for in a used Tesla?

For most, it is clear what to look for when buying a used car with an internal combustion engine. However, with electric cars, especially Tesla, there are a few things to watch out for.
– Damage to the panoramic roof
– Functionality of the brakes
– Performance of the battery
– Charging power (AC or DC)
– Fogged headlights
– Leaking coolant

That said, inspecting a used car is significantly less costly than inspecting a non-electric car. Regular software updates from Tesla ensure that technical bugs in the system can be fixed and there is absolutely nothing to worry about when buying a used vehicle from Tesla.

The offers and possibilities to buy a Tesla are numerous. You have a wide range of financing options for a Tesla vehicle and even the used Teslas are a good investment.
Of course, before buying, it is a good idea to drive a Tesla at least once to know what you are getting yourself into. Therefore, it is a very good option to rent a Tesla for a certain period of time – this can be done from one day up to a long-term rental for a month, in which you can absolutely enjoy the Tesla feeling.

The author behind the articles on DRIVAR® is founder and managing director, Phillipp. He possesses years of industry experience, has founded the Germany-wide sports car rental company Motion Drive® in 2009, and is the creative mind behind the car-sharing marketplace DRIVAR® from 2017. Phillipp has been actively involved in motorsport since he was a child and is also a sports car enthusiast in his private life.